Presenting the next instalment in The Eurovision Saga (collective title pending), by the fabulous Fifi!
No idea what this is about? Read:

Thanks for the lols first thing on my birthday again, Fifi 🙂

They were angels of friendship, sworn to protect good feeling among humankind.

They were ships of love, sailing toward the distant shores of peace.

They were guardians of music, warbling their way to the tonal zenith.

They were Belarus, and they were here to stop Eurovision being mooned.

The Otherworld was a pure place, full of ceaseless light and joy. Luminescent spheres hung in the sky like glowing fruit. Mountains of cloud drifted slowly across green plains. Snowflakes formed in shimmering silhouettes against the sky before bursting into rainfalls of gentle ice. Always there was the distant sound of singing. And there was great wifi—free, with unlimited download and strong reception.

Unfortunately, perfection got kind of boring after a while1. Two of the angels, who called themselves the Naviband, wished to venture out from their world of light and make a difference in the harsh slums of Reality.

‘Can’t you see?’ these two angels had pleaded with the Elders of Paradise. ‘We are stagnating in bliss here. We have so much, and the humans have so little. You know they discontinued pogs? Pogs. And don’t even get me started on tazos! The humans need our help.’

‘Evidence of their misguided nature, it’s true,’ an Elder had sighed. ‘But is that not more reason to keep our distance? We do not wish to be contaminated by their pogless existence.’ The female angel had drawn a great breath, gathering her thoughts. ‘Hey! Hey! Hiyiyoyoyo,’ she had cried, waving her arms from side to side. In the language of the angels, this translated into an irrefutable argument about helping one’s neighbours, preventing the spread of malevolent poglessness, living a worthwhile existence, and using one’s privilege to make a difference in an otherwise uncaring and chaotic universe. The Elders had been convinced; the angels had sailed forth from the Otherworld on their ship of love2, into Reality.

A man had been waiting to meet them at the gateway between worlds—a Guy wild of hair, bright of eye, soulful of face. He had handed them two free drinks and a bundle of papers, then sat cross-legged on the grass and pulled a guitar from his pants.3

‘Your human documentation,’ he said, nodding at the papers as he strummed. ‘Passports, birth certificates, useless receipts that somehow ended up in your bag even though you haven’t needed them in months. I’ve also set up your Facebook and Twitter accounts; you’ll need them to survive within this world and to walk among mortals.’

‘Are you one of us?’ the female angel asked, cautiously sipping at her drink. It didn’t quite match up to the Heavenly Mana she was used to, but it wasn’t half bad, either. ‘A being of light from the Otherworld, made manifest to walk among the base flesh of Reality?’

The Guy from the Gateway smiled mysteriously and, evading the question, passed her another drink.

‘I am glad you are come, my sister and brother,’ he said, returning to his strumming. ‘I lead a Resistance among humans, and we need your help. Are you familiar with Eurovision?’

‘Of course,’ the male angel said. He pulled out his own guitar, an acoustic covered in white flowers, and joined the Guy to strum cross-legged on the grass. ‘The glorious kitsch and unabashed joy of Eurovision powers the spiritual ether of the Otherworld from which we come.’

The Guy nodded. ‘Good. But did you know that an Organisation of evil threatens Eurovision?’

‘No!’ the angels gasped.

The Guy nodded solemnly. ‘It poses a threat to the most significant and abiding aspect of Eurovision.’

The male angel had shuddered to a halt, guitar strings twanging. ‘No. No. Not while we are here. What do you need us to do?’

‘We have received word that an enemy faction is planning to discredit one of Eurovision’s allies by…’ He coughed delicately and became suddenly fascinated with tuning his guitar4. ‘Showing audiences the moon.’5

‘That does not sound so bad,’ said the female angel, surprised. ‘The moon in our world is very beautiful.’

His eyes had a harrowed look, and so they trusted him.

‘Who is this ally they wish to discredit?’ asked the male angel.

‘It is a faraway land called Australia,’ answered the Guy, staring into the distance. ‘I have lived many years, my friends, and travelled to many places. I have seen things strange even by the standards of the ethereal Otherworld. But I have never encountered anything quite like Australia.’ He leaned forward. ‘They smash avocados there. It is a strange ritual, and one day I will uncover the mystery behind it.’ He shook his head, shaggy mane tumbling. ‘But I digress! That is a purpose for another day. My friends, I must ask you to infiltrate Eurovision, bolstering it with your sweet music, and prevent the Organisation agent from…unveiling the moon.’6

They had clasped hands, the three of them, there in the grassy meadow behind a roadside McDonald’s.

‘We will not fail you,’ said the angels. ‘We will veil the moon.’

And here they were, newly born as Belarusian musicians, riding their ship onto the Eurovision stage with the power of the Otherworld shimmering around them. Not even the moon could stop them now.

‘Hey! Hey! Hiyiyoyoyo,’ they sang, and the world agreed.

After the show, the angels rested backstage. Their song of hope might be over, but the night’s work had only just begun.
‘No sign of any Organisation agents,’ reported their Resistance contact, an Australian called Nefarious Hawker. Her name seemed more suited to an instigator of evil than good, but she had a tendency to make tea every time she saw them, so the angels trusted her. Only the pure of heart made that much tea.7

‘We must be vigilant,’ murmured the female angel.

‘I am being vigilant,’ protested Nefarious. ‘I remembered to put honey in your tea.’

‘No, I mean we have to be prepared for the Organisation’s next move. They could strike at any instant, and the smallest hint could alert us. We must not overlook even the tiniest detail. We will remain one step ahead of them, and we will prevail.’

‘Aaaaand a man in an Australian flag just got up on stage and mooned the world,’ said Nefarious.

‘What.’ The angels looked up to the stage, where a man wrapped in a flag was being hustled away by Security.

‘Well, shit,’ said the angels of friendship and love.

‘Why?’ cried the female angel, bearing down upon the criminal. He sat in one of the cells buried in the labyrinthine tunnels beneath Eurovision; the dungeon damp didn’t seem to be affecting him, however, as he was still comfortably wrapped in an Australian flag.

‘Why what?’ asked the man, looking up at her in surprise. He blinked rapidly, dazzled by the fizzing anger of her Otherworldly aura, but the angel had no time for mortal sensibilities.

‘Why did the Organisation wish to discredit Australia? What evil plans lie behind this callous move? Why can you not let us have this one joyous celebration of kitsch?’

The man looked back at her blankly. ‘Organisation? Lady, I just like to moon people. Did you see me out there? Hundreds of thousands of people, all with a butt’s-eye view.’

‘Don’t lie to me! According to our sources, you’re an English agent of the Organisation, masquerading as a Ukrainian journalist, wrapped in an Australian flag. You have some kind of convoluted plan to solidify Australia’s alliance with British colonial powers by alienating the country from Europe with a show of disrespect at the continent’s most beloved musical event.’

The angel whirled to see a creature unlike anything she had ever known. It looked a little like the Zombie King from the Otherworld Depths, but with more horns and a stylish hat.

‘Who are you?’ she asked warily.

‘One of the Organisation’s agents,’ the creature answered, ‘but here entirely in a spectating capacity. I just wanted to watch a good show for old time’s sake; we have no plans to interfere with Eurovision this year.’

The creature shrugged. ‘2016 was a busy year for Evil. Do you know how many performance goals the Organisation met? We passed all our KPIs, sure, but we totally burned out. We’re taking this year off to rest up, bounce around some ideas, and start fresh in 2018. You should check out our annual report.’

‘So you don’t want to undermine Australia before the world?’

‘Good Lord. As if the Organisation would need to step in to make Australia look weird! You know they smash avocados there, right?’ The creature shook its horned head, shed a few scales, and strode off. The angel watched it go. Without turning around, she knew that her companion had come up behind her. ‘So it was not Evil,’ she murmured. ‘Only the man in the moon, laughing at us.’

‘But we inspired many tonight, my love,’ said the other angel. ‘And there is always next year to fight Evil.’

‘True,’ she sighed. Nefarious appeared at her side with a cup of tea, and the angel sipped it. ‘Come, friends. Let us eat cake, drink tea, and hey hey hiyiyoyoyo. It is the Eurovision way. We will fight Evil again…next year.’ 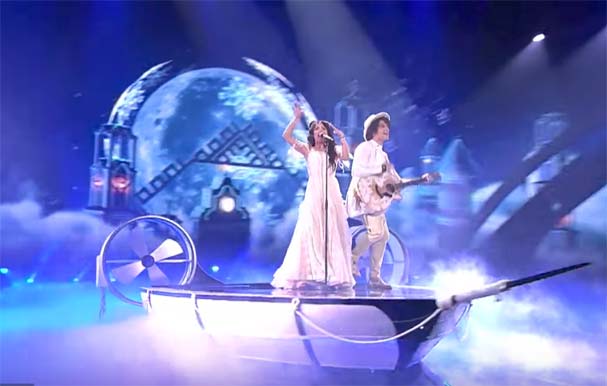 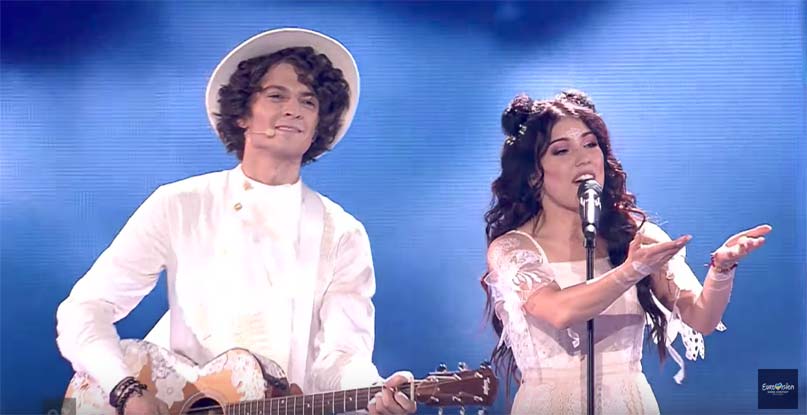 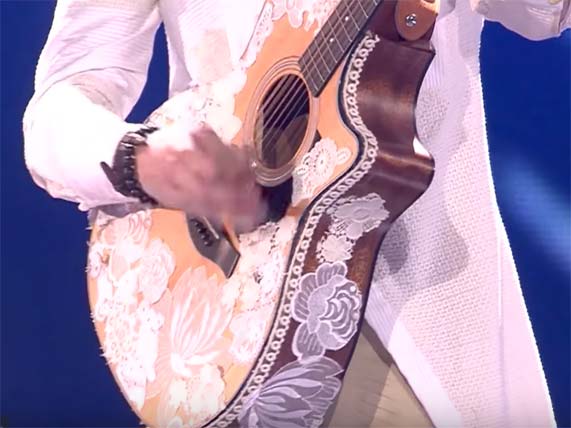 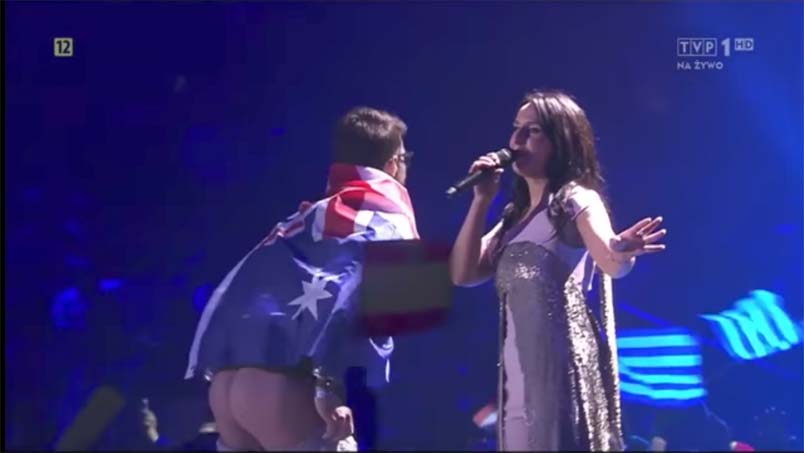